About Graham Archives Subscribe to this blog Get new posts by email
Note: writer at work
How "unique" is this new perennial? One of the many interesting points made in Jennifer Owen’s Wildlife of A Garden, reviewed here recently, is the value of Buddleja davidii as a food plant for moth larvae. Of course, it’s more commonly thought of as a food plant for adult butterflies, its common name is butterfly bush, and it was this feature which was examined during the recent trial at the Royal Horticultural Society’s garden at Wisley, near London.

It’s important to say at the outset that in some areas of the USA in particular, including the Pacific North West, it’s inadvisable and even illegal to plant Buddleja davidii as it has proved damagingly invasive.

In 2009 the adult butterflies visiting 49 of the cultivars of B. davidii in the trial were recorded and details were also taken of the flowering stage, the size of the shrubs and their flower color and fragrance.

Plants varied in their size and flowering stage but nevertheless the results show striking variations. Two cultivars stood out at the top of the list, ‘Orchid Beauty’ (above, click to enlarge) and ‘Foxtail’ (below, click to enlarge), followed by ‘Dart’s Ornamental White’ and ‘Pixie Blue’. At the other end of the list nine cultivars showed no adult butterfly visitors at all. Interestingly, Butterfly Conservation ran a trial in Dorset which revealed that ‘Foxtail’ was the buddleja most visited by butterflies. 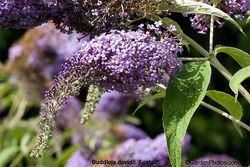 The results of the RHS count, and the trial as a whole, are published in the recently published report which also states: “Colour seemed to have little impact on the choice of flowers that were visited by the butterflies. The top four cultivars are listed as being violet (x2), white and light blue.

“The strength of the scent seemed to have some impact. The top two had medium scent levels and the 3rd and 4th had relatively high. So it seems that a fair amount of scent is required to attract butterflies.

“A general observation indicated that the plants which were most popular were the cultivars which were the largest, and were densely covered in fully open flowers, indicating that the butterflies were attracted to the quantity of food on one plant.”

The report also lists the observations by Andrew Halstead, RHS Wisley Principal Entomologist. And of course it shows the cultivars which received the Award of Garden Merit and also gives the results of visitors’ votes for their favorite over three years – ‘Miss Ruby’ was the clear winner amongst visitors.

The RHS report on its three year buddleja trial is available here. Anyone interested in buddlejas should take a look as it's a fascinating and wide ranging assessment.