About Graham Archives Subscribe to this blog Get new posts by email
Guest post: judywhite goes nuts for nuts
£40 (that’s more than $60) - for a fescue!! The local council back in my home town in picturesque rural Northamptonshire in England’s East Midlands has a plan. They want to “enhance the appearance of the town”. Sounds splendid, doesn’t it. Who could complain abut that? Not so fast.

The council’s own little magazine reports: “The project will start with the town boundaries to improve the various approaches to the town. Flower beds will be created and the areas improved in such a way that will attract wildlife as well as making the entrances to the town have much more impact.”

No. Not “flower beds”. No no no. See the steam coming out of my ears?

I know, coming from a garden writer that may surprise you. But the main approach to the town, from the east, is shown in the picture. Not a “flower bed”, but there’s already a lovely display of native ox-eye daisies. They follow the native spring cowslips. And there’s even a rare campion in there somewhere. Orchids will surely arrive eventually, they did at another site in the town. What’s wrong with that? 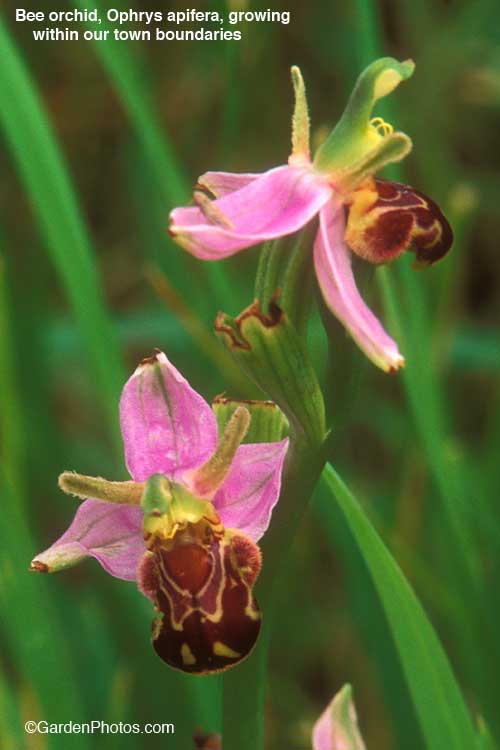 This wildflower planting was created when the new bypass was built in the 1980s and was inspired by Dame Miriam Rothschild a pioneer of planting native wild flowers in gardens, public places and roadsides. She was born and lived all her life just two miles away and also established a business growing seed of native flowers and developed new techniques for restoring the richness of meadows which had been reduced to grass monocultures by the use of weedkillers.

We have an internationally recognised local pioneer of natural roadside planting whose example the town has already followed. And the best they came up with is flower beds?! Perhaps the council would prefer

Years ago, Pamela Schwerdt who for over thirty years was joint head gardener at Sissinghurst Castle, perhaps England’s greatest garden, took me aside to persuade me to write about the increasing popularity of planting beds of big yellow daffodils at the approaches to villages and country towns. “They just look wrong,” she told me. She was cross, and she was right to be. I’ve sounded off about such thoughtless planting in national newspapers and magazines repeatedly over the years and here on this blog last year. 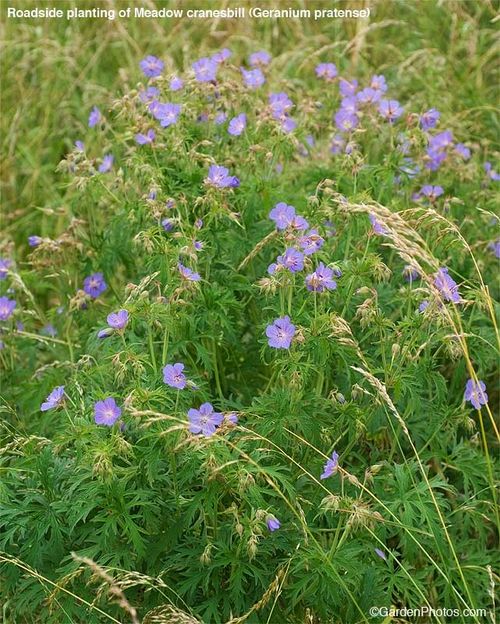 And now flower beds are planned for the approaches to my own town. No. Not only do we have the inspiration of Miriam Rothschild to guide us, but we need just look out of our car windows as we drive through the local lanes and see the richness of wildflowers, both colourful and unusual, to be inspired again. And let’s not forget that the maintenance involved is minimal. We just need to remember the miserable weed-infested flower beds that greet us as we approach another local town for the point to be rammed home even more surely.

So: no flower beds, no big and blowsy ‘Carlton’ daffodils, no petunias or mega-marigolds like yellow dishmops despoiling the entrances to the town.

I didnt know they had such horrid plans!! I worked for Miriam years ago , she wuld turn in her grave if she knew such plans!! I will prostest to those in the Council .

Spot on Graham. I've been blogging about this a lot over at my place the past couple of years. Now others are joining in with my regular 'Out on the Streets' feature where we blog about the public planting in our neighbourhood every 3-4 months or so. Shame you didn't write this last week, 'cos I would have put you in my wrap-up piece to close the latest round of offerings.

The latest my council has done is to retain the roundabout mish mash and add a plonked raised bed filled with annuals with a 'Welcome to Chippenham' sign in the middle :o

It would only take a little more effort to simplify the mish mash arrangement and use plantings of wildflowers + the native trees and shrubs seen in the very nearby countryside instead.

I sincerely hope your protests are successful.The way the approach to your Town looks now is one of the reasons visitors keep coming to your country.Anything else would look so wrong,like a wrong note in a beautiful piece of music.

Thanks for the support, everyone. I'm just waiting for a response here from the town council... should be interesting.

Dont let the town planners disturb this beautiful natural planting! Natural swathes of unsophisticated flowers are infinitely preferable to some ghastly hybrid garish display (which has to be ripped up and replanted annually)

You're right, Janet, garish bedding is not a sustainable way to develop welcoming plantings. I'm hoping that our local Transition Town group (http://www.transitiontowns.org) will help the town change direction on this.

Shame I spend so much time away. "So what are you going to do about it? I hope you fight it." says Sharon by email. From 3000 miles away I can only prod and poke everyone else and give advice, I'm afraid.

This is all very silly. Why is the council wasting time and money and resources on raising flowers in a greenhouse to plant where there are already some lovely wildflowers? When is the next election?

Ellie
(I don't know where the string of letters that replaces my name below has come from.)

Posted by: me.yahoo.com/a/M1dnHSI_h.ruBmhOcQiAstRuRRPWzCrIklzKJubq9WXFOPugrhQ- | October 14, 2010 at 08:25 PM

Well it is good to see so much interest in our project. I am pleased that you care about Oundle because that is exactly what is driving this project. I wrote an article in the last Oracle to describe what we are doing and ask for your involvement because I and the Town Council care, as you do, about Oundle and how it looks and is and there appear to be misunderstandings and inaccuracies in the blog and your responses to it. OTC supports the planting Miriam Rothschild did and has no plans to change it. You should also look at the other side of the same road at the very unpleasant appearance of the Riverside with its broken down fencing and derelict grounds (this is also owned by the Rothschilds). Similarly have a look at the corner opposite the Smiths at No 4 cafe and see whether you agree it is an eyesore and needs improving.
Our plans are to improve the appearance of Oundle and improve the wildlife in and around the town. We are not planning municipal planting but rather planting that will enhance the insect population and wildlife in general. We have also asked you to get involved and let us know what you want. So far very few of you have done this. The planting project is about involving Oundle people not doing something to them-if you have views you can get involved and let them be known openly-not subversively in the blog of someone whose report is inacurate and imflammatory. My contact details were clearly given at the end ot the article in the Oracle-perhaps you would benefit from finding out what we actually intend rather than being misled by someone who has not himself bothered to find out.
Lynda Purser

Well, Lynda, what I said was based on the article you wrote and putting my own views in my own blog is doing exactly what you say: being open.

In the town centre, plantings can be different and if the council has the resources to enhance the town centre with more plantings that's great. And I made some suggestions to a reporter for a piece in the Oundle Chronicle a few years ago. But, unfortunately, the enthusiasm for volunteer-managed plantings is perhaps evidenced by the lack of people responding to your call for input.

If you quoted her article correctly, which I'm sure you did, then they've already decided what to do and are not looking for input.
"Flower beds will be created" - clearly bad.
"the areas improved in such a way that will attract wildlife" - clearly good
"making the entrances to the town have much more impact" - sounds like flower beds of geraniums and marigolds, like the weedy flower beds as you approach Peterborough ten miles away.

Why not start by saying: "How can we improve the look of our town?" Not by annpuncng what they've already decided.

That woman from your town should know that blogs are designed for blunt talk, not for pussyfooting. Christ, Say what you think - right. And she can say what she thinks. No Problem. As long as it's a blast. Also, Why does she think this is someone else's blog and not your blog.

Well, Mr Rice, you have certainly stirred things up. You were very hard on their plans, I think, it seemsm that they talk about wildlife etc as well as flower beds.

I saw that you didn't give the name of the town in your original post, I was thinking where it could be bu7t it was the larger picture you were thinking of and I am sure your town is not unique. But now the comments will appear in Google search results for Oundel in a week or so.