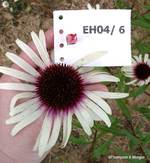 Recently I’ve been working on an article about the new hybrid echinaceas for the Royal Horticultural Society’s Plantsman magazine. These are the orange and yellow hybrids like ‘Orange Meadowbrite’ and ‘Harvest Moon’ as well as others not even released yet. I grew all the plants, and talked to all the breeders.

One of the breeders I talked to was Charles Valin at Thompson & Morgan - you can see a slide show his plants here but let me emphasise that they're not yet available to gardeners or growers – this is an exclusive sneak preview. T&M is the only British seed company with, like myself, a presence on both sides of the Atlantic – alongside their extensive British operation they also have a permanent staff in the US and a special US version of their catalog and website.

For many years T&M have been breeding new annuals and perennials for their seed catalog - I’ve visited their breeding station many times. They’ve met with increasing success and their plants have won many awards. In recent years they’ve also been working on new plants intended to be raised from cuttings or in the laboratory by tissue culture as well as from seed – and one of their current projects is echinaceas.

They’re creating some impressive plants, as you can see from the slide show here. Some have reached the stage of being assessed for possible introduction on both sides of the Atlantic so I hope for news next year of when the first will be introduced.

So check out the slide show here and as soon as my article in The Plantsman is published, I’ll be sure to let you know.

Most look intersting, although a few look dull. I wouldn't be a fan of those with fewer petals.

I grew 'Green Envy' this year and was impressed.

As I say, Mark, these T&M echinaceas are a work in progress though I agree that those with fewer petals are less effective, especially if those petals are also narrow. But some of the colors, especially the bicolors, look very promising. And it's not just about the actual flowers. They say they are also improving plant habit and other features.

I have yet to meet an echinacea I didn't adore...this year's new love has been 'Green Envy'--the plants I got have grown immensely and been incredibly floriferous.
Do you--or Thompson and Morgan--find that the echinaceas sport somewhat? A nursery operator friend brought in a number of echinaceas from the Big Sky series and some of them were quite odd looking, not at all the way 'Sunrise' or 'Sunset' normally look. I was curious about this and still haven't found an answer.