About Graham Archives Get new posts by email My blog is re-launched!
Previous month:
June 2007
Next month:
August 2007

Well this proves the point, I think. Butterflies really do like verbenas. There I was, snapping away taking pictures of Verbena ‘Aztec Coral’ at BallColegrave in Oxfordshire (see previous post) – when this peacock butterfly came along and proved the point. So… verbenas are definitely recommended, for colour and for attracting butterflies.

Following up my previous post on echinaceas with malformed petals, I saw another ruined by quilled flowers in a garden yesterday. It's  probably 'Sunset', the label had gone astray and it's difficult to be precise with so few petals and those so quilled.  Some people really like it, though, and apparently it's caused a lot of comment. And the degree of quilling changes according to the time of day. There are five flowers on the plant, all with quilled petals.

This is probably the best new plant I’ve seen this year! OK, I haven’t had the chance to actually grow it myself yet and I’ve only seen it in one place – but Impatiens ‘Fusion Peach Frost’ is simply gorgeous.

Yesterday, I spent the day at Ball Colegrave in Oxfordshire. This is the British base of the Ball Group which includes PanAmerican Seeds and Ball FloraPlant; their HQ is in Chicago. They’re one of the top international breeders of patio plants, container plants, bedding plants and half-hardy perennials (often known in the US as temp-perennials). They also sell young plants and seed to growers – but not direct to home gardeners.

Their Oxfordshire show gardens are simply spectacular. Everything is beautifully grown and many of the displays are under cover – just as well in this wettest of all British summers… ever! So they look great. So what's so great about this new impatiens?

Posted at 12:26 AM in Annuals and seasonal plants, New plants | Permalink | Comments (0)

A first glimpse of a new plant…

OK folks… here’s a brand new plant, as yet as unnamed, that no one has seen before… It’s a variegated form of the perennial honesty - Lunaria rediviva.

It was brought to the meeting of my RHS committee as we gathered to judge trials of Kniphofia, Aconitum, Verbascum and multiflora petunias at the RHS garden at Wisley in Surrey yesterday (yes, I’m back in England again).

It’s really dramatic and looks to be a great plant for shade, with fragrant flowers too – but so far it has no name, it’s not yet available from anyone. So please don’t email and ask where you can get it. If, in time, it proves possible to propagate and becomes available – I’ll let you know. There has been a different variegated form of this plant, ‘Partway White’, but the man who grew it, Bob Brown of Cottage Garden Flowers, says this new one is better. Do you like it?

Next Saturday I’ll be at the Summer Garden Party at Foxtail Lilly, Tracey Mathieson’s delightful country garden and barn shop in Oundle, Northamptonshire.

Featured last year in The Garden, the Royal Horticultural Society’s monthly magazine, the relaxed but imaginative planting style has attracted great attention and the shop, set in a 19th century barn, combines an interesting selection of plants with bouquets of cut flowers, many of which are grown on site. Vintage gardenalia and small antiques are also on sale alongside crafts made by local craftspeople and a choice selection of Tracey’s favourite gardening books.

Come along on Saturday 28 July, from 2-5pm, to enjoy the garden, relax with drinks and light refreshments, look round the shop and perhaps win a free signed copy of my RHS Encyclopedia of Perennials.

I hope to see you there.

Posted at 05:01 AM in Lectures, media and events, Nurseries, Transatlantic life | Permalink | Comments (0)

The recently introduced echinaceas in all the new colors have often been wonderful, but one of the disappointments I’ve had is that sometimes the flowers are malformed. Like this flower on ‘Sunrise’.

The rays open partially quilled, like a “spoon” chrysanthemum, then some open out flat while some don’t and the rays are all at different stages at the same time – the result is mess. And it doesn’t seem to happen with the old favorites. I’m told it’s more common in the plant’s first year – this plant of ‘Sunrise’ is in its second year. Do other people find the same thing? Or is it just me? And why does it happen?

OK, I confess, I’ve been to Lowe’s again. [Brits: this is a huge B&Q-type place, often decried by serious plants people.] I was there to by timber, OK?, but I took at the plants while I was there. What did I find?

I found a batch of the pretty Japanese Painted Fern, Athyrium niponicum var. pictum, with a big colorful label. And right after the name were the letters PPAF – Plant Patent Applied For. Well, they may have applied for a patent but they must know perfectly well they won’t be granted it. Why waste their money? Perhaps to put people off propagating from their stock? Why bother?

If a plant is patented then anyone except the patent holder must negotiate a license and pay a fee to propagate and sell the plant - plant patents are intended to ensure that anyone who spends time and resources developing a new plant is properly rewarded. But this plant fails on a number of Plant Patent rules published by the US Patent and Trademark Office. A plant can only be granted a patent if:

Phlox and achilleas on trial

There’s been a resurgence of Phlox paniculata breeding recently, with the aim of reducing the height and making the plants generally more manageable – for nursery and gardener. Mildew resistance is also an aim along, of course, with impressive color. And perhaps the most colorful part of the whole trial was the comparison of the existing Junior Series and Volcano Series phlox with a new range.

Variegated alchemilla - so far so good

Just an update on how the variegated alchemilla is faring. I first wrote about it here, and two months later it’s growing well, still throwing leaves splashed with yellow, as well as a few plain green ones, but not flowering. So far, so good. 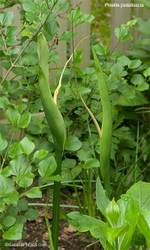 Ever grown pinellias? I hadn’t until the last couple of years but now I have three, and they’re excellent. Pinellias are members of the arum family, there are only about six species, and they’re remarkably different. They all seem easy to grow, increasing well and, while not exactly flamboyant, all are fascinating, and one is quite dramatic.

Pinellia pedatisecta, from Munchkin Nursery, is big – mine is about 3ft/90cm high with bold leaves split into up to eleven leaflets. The flowers stand up on separate stems and keep coming for weeks and weeks – months even - in partial shade. The spathe is green and from it emerges an enormously long yellow spadix. 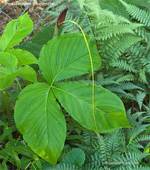 leaves split in three- it’s effective just for its leaves - and the inside of the spathe (the cowl-like part) is maroon instead of the usual green – it looks a little sinister. It gows about 12-15in/30-38cm, the foliage spreads out widely and it thrives under a birch. And, as you can see from the picture, the yellow spadix is impressively extended. 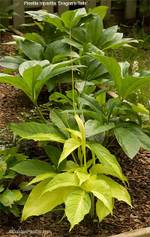 Pinellia tripartita ‘Dragon Tails’ is small, about 12in/30 and compact with small neat foliage. But the leaves are almost completely yellow, with just a few green patches. It really gleams. The spathes are yellow and, again, the slender yellow spadix surges straight up then snakes around unnervingly. I have it part shade and it’s increasing well. A bulbil is produced at the base of almost every stalk, so it can incraase quickly, in fact the normal green one can be a nuisance. I had this on trial from the raiser, TerraNova Nurseries, but it’s available from Plant Delights.

Three great plants, I’ll be looking out for more.