About Graham Archives Subscribe to this blog Get new posts by email
Who Does Your Garden Grow? by Alex Pankhurst
Sculpture in the garden 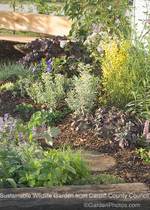 Back in England and my first excursion is to the Royal Horticulutral Society’s flower show in Cardiff (which, for the benefit of American readers, is in South Wales, not in England at all, 150 miles west of London). I’ll be up at the crack of dawn tomorrow – my fellow judges and I begin work at 7am – but this afternoon I had wander round as the exhibitors were putting the finishing touches to their stands.

I’ve not been to this show before but I can tell you it’s well worth a visit. Laid out in an attractive park right alongside the ancient and rather eccentric Cardiff Castle, there are ten delightful outdoor show gardens and, the main attraction, two capacious floral marquees filled with plants of all kinds. There are sixty four exibits in all plus some non-competing nurseries selling even more plants as well as a range of other stands.

The floral marquee exhibitors are mainly nurseries, from right across England and Wales, who compete for the coveted Gold Medals we’ll be awarding tomorrow morning. They display either cut material or plants in pots, arranged formally in vases and bowls or set out more naturally in garden landscapes. There’s plenty of variety.

The bougainvilleas from Westdale Nurseries are spectacular (see picture); the perennials, both old and new, from Hardy’s Cottage Garden Plants are delightful; the American aquilegias from Three Counties Nurseries are charming; I coveted every one of the clematis from Taylor’s Clematis Nursery. 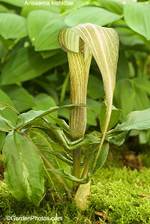 As well as old favourites, there are rarities to be seen, like Arisaema kishidae (see picture) as well as plants never seen before. Matthewman’s Sweet Peas, for example, (see picture) have broadened their approach and are devoting their entire exhibit to Lathyrus vernus, the dwarf perennial relatives of the sweet pea. As well as familiar varieties, like ‘Rosenelfe’, they’re showing a number of new and noticeably colourful seedlings they’ve raised on the nursery. These prolific, but underrated shade perennials, deserve to be grown more widely and I’m sure these new introductions from Matthewman’s Sweet Peas, when they become available, will inspire gardeners to plant these tough and easy spring pernnials.

As well as all these wonderful plants and gardens there’s advice from RHS specialists, talks and demonstrations, and are fine Welsh food and crafts are on sale.

UPDATE (Next day): Well, it's such a good show that, between us, we awarded more Gold Medals, relative to the number of exhibits, than ever before at any RHS show! Hardy's Cottage Garden Plants won the award for the best exhibit in the Floral Marquee, and it really is superb. A beautiful arrangement of expertly grown new and familiar perennials.

But spare a thought for Kelways. Their peonies were absolutely gorgeous but the weather on the days running up to the show had been so hot that they'd opened up far more than they expected. Then, overnight before the judging, the weather was really chilly - there was almost a frost. So those poor peonies had a tough time. However, they still won a Silver medal - testament, I think, to the superb quality of the plants themselves and the skill of the growers at Kelways. But look out for their irises at Chelsea.

When you act as a judge, Graham, do you wonder whether a plant such as the Arisaema you illustrate, has come directly from the wild? Most of them do, usually from the Chinese Nursery Chen Yi. Pity they use that moss, is it from a sustainable source? Enjoy the show and your judging.

Yet again! - sorry - these are my passions at the moment - are the railway sleepers and wooden steps in the first picture from a sustainable source? Can they be tracked back to source?

I grow a Lathyrus vernus (pink, don't know its variety name) in full sun, in an old stone trough. It self seeds most satisfactorily.

Your points about the origins of plants and materials on show exhibits are ones which we often consider. Our main duty, however, is to judge the appearance of the exhibit presented to us at the time of judging.

I was not on the judging panel which assessed the garden in the picture, but now that timber railway sleepers (railroad ties - for Americans...) are no longer used, concrete is used instead, the ones used for landscaping are usually those which have been taken up from railway tracks when they're replaced with concrete at the end of their useful life.

The origin of the plant materials used on exhibits is something of as minefield. It is true, that in some cases plants on show may have been collected in the wild. However, the difficulty is that it's almost impossible to be sure that any given plant has been collected from the wild in suspect circumstances. Some trilliums, for example, are rescued from sites being cleared for the construction of roads, factories or housing developments - showing and selling these seems rather a positive response to their imminent destruction. It is possible that plants alongside, perhaps on the same exhibit, may have been raised on the nursery and other collected from the wild in less commendable circumstances.

Exhibitors are, however, encouraged do display a sign stating that the plants on their exhibit have been propagated and grown on the nursery, where this is the case.

As I say, these issues are often discussed but the problem is always in making an accurate judgement about any one plant or use of materials.

[These, I should say, are my own views - I am not speaking officially for the RHS.]